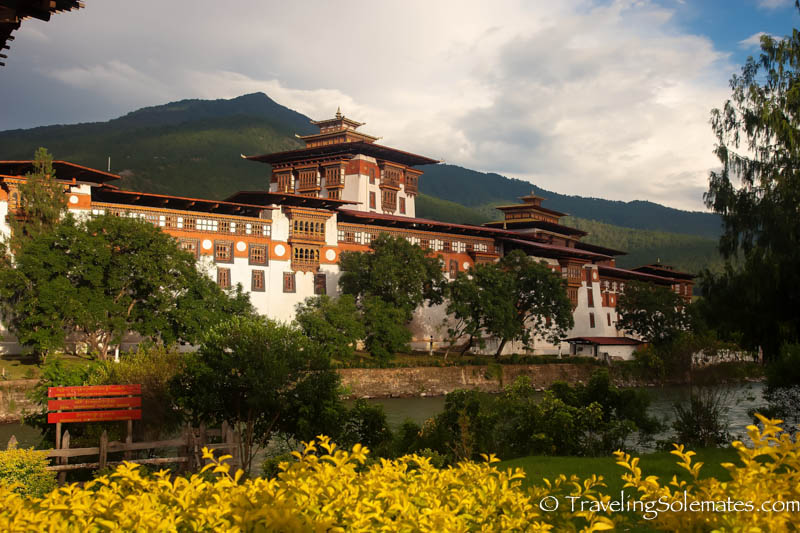 On our Day 3 in Bhutan, we left the capital city of Thimphu after two days of wonderful cultural immersion and headed to the scenic countryside of Punakha Valley. 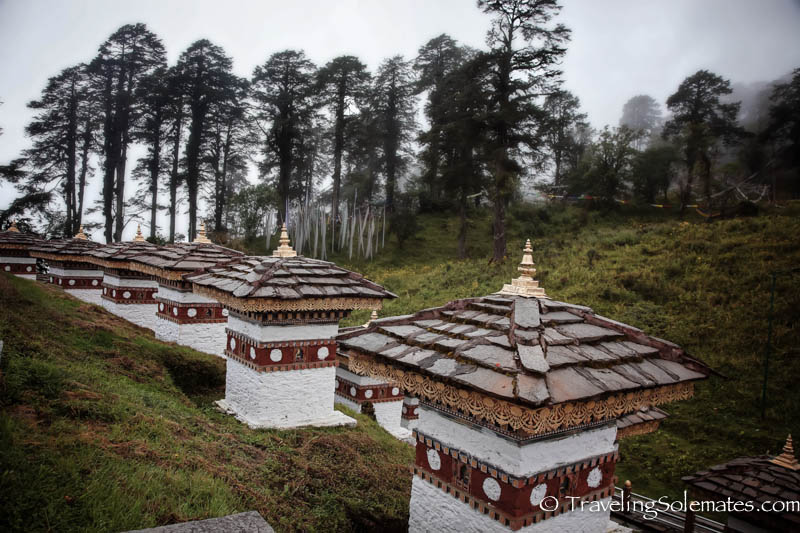 On the way to Punakha, we passed by Dochu La Pass about forty-five minutes outside of Thimpu. Gracing this high mountain pass are 108 stupas 108 chortens  built by Queen Mother to honor the Bhutanese soldiers who were killed when fighting the Indian rebels in 2003.

From the alpine high pass of Dochu La, the mountain road descended into the lush countryside of Punakha Valley beautifully landscaped with thick forest and terraced rice paddies. 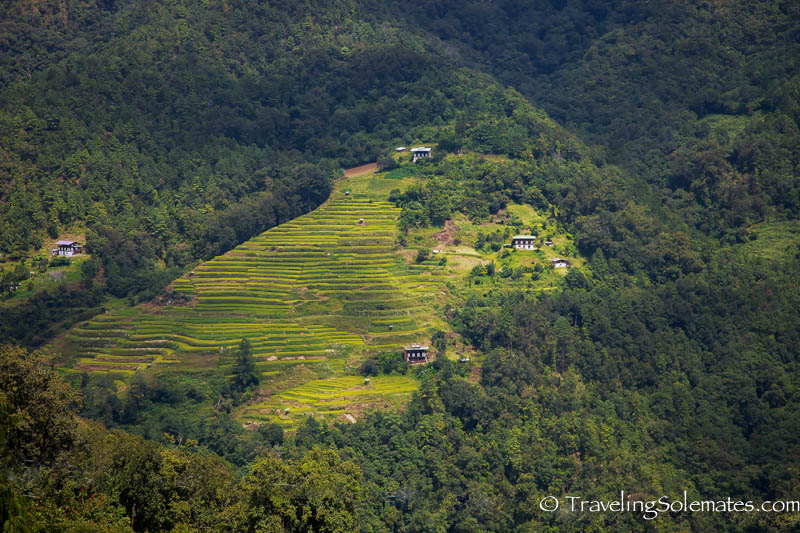 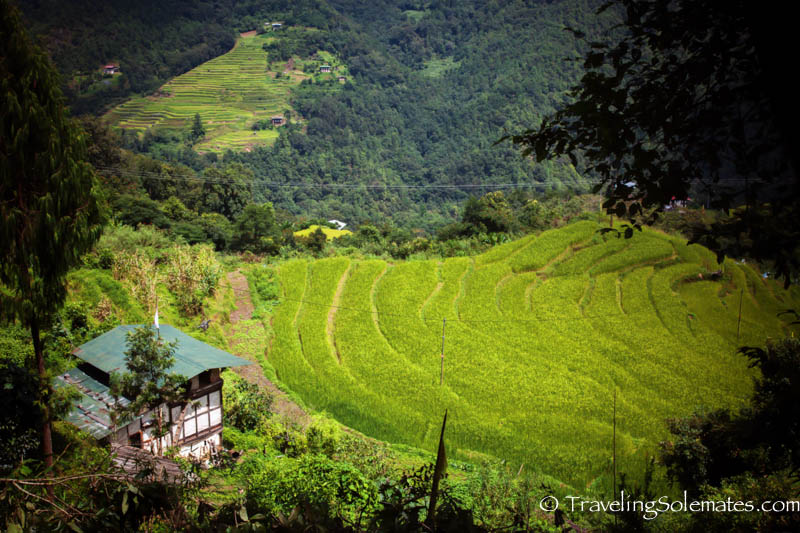 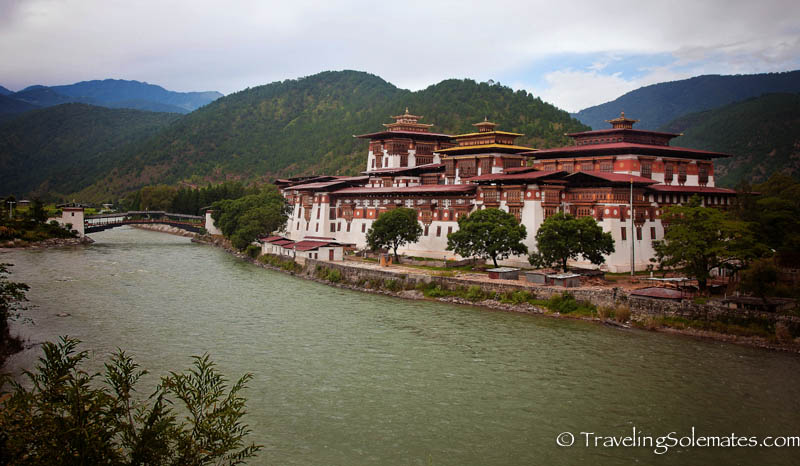 The highlight of venturing to Punakha is a visit to its majestic Dzong. Dzong means fortress and is the administrative and monastic center of a Bhutanese town. 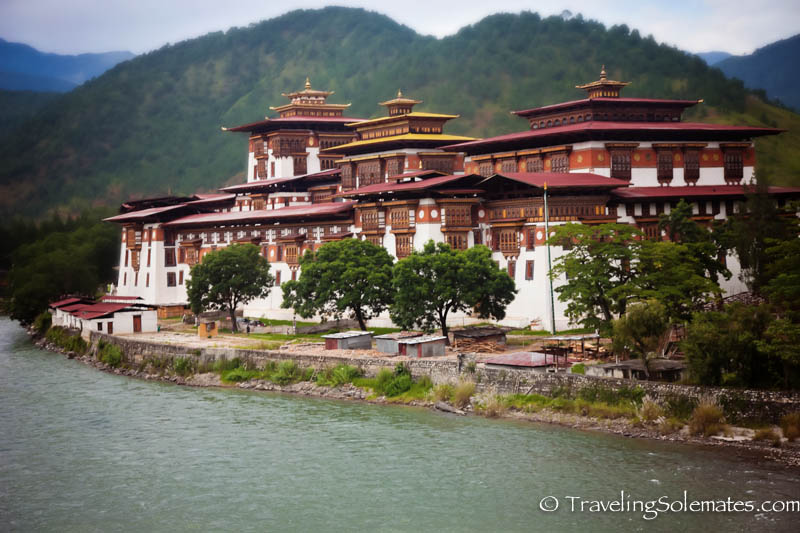 Also called Punthang Dechen Phodrang (The Palace of Great Bliss), Punakha Dzong is beautifully situated between the convergence of Phochu and Mochu Rivers ( “male” and “female” rivers),  It is said to be the most magnificent of all the fortresses in Bhutan. 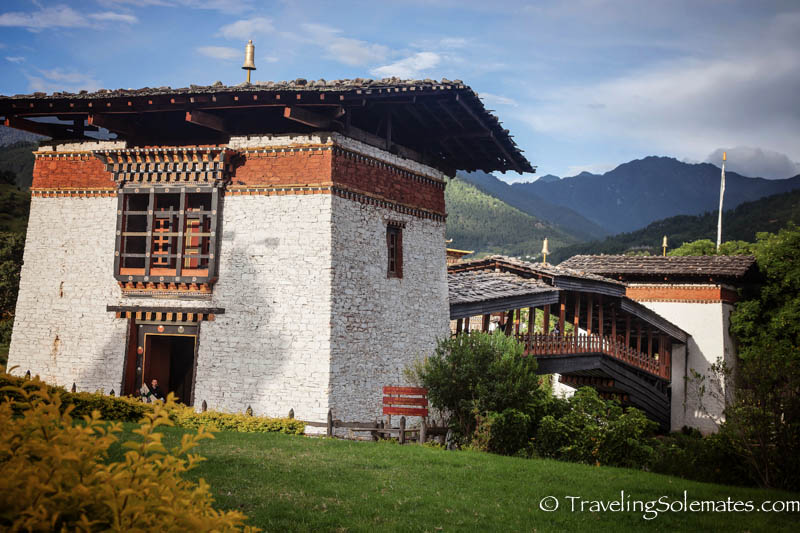 The Bridge into Punakha Dzong

Built in 17th century, Punakha Dzong served as the capital and seat of goverment of Bhutan before it was moved to Thimphu in 1955. Today, it houses the administrative and judicial offices of Punakha District. 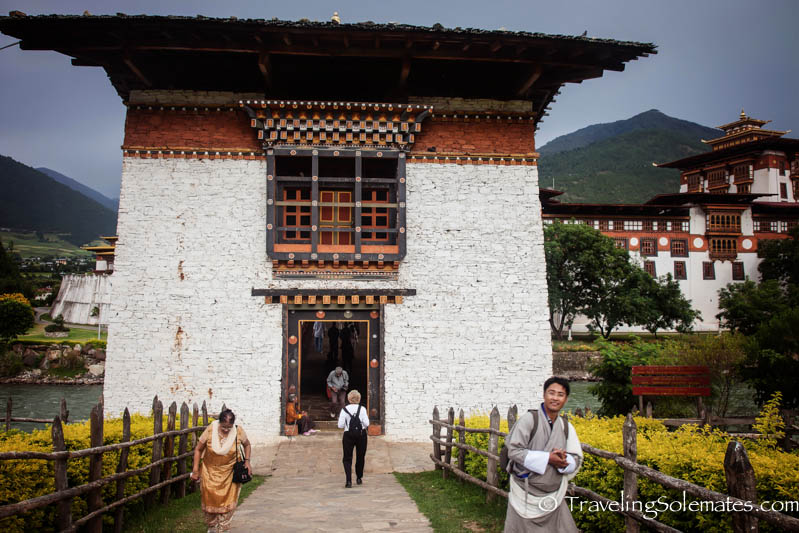 Punakha Dzong is also the winter home of Bhutan’s spiritual leader, Je Khenpo. He and his retinue of 600 monks migrate to Punakha from Thimphu every November. The Dzong also houses the sacred remains of two of Bhutan’s holiest lama and saint. 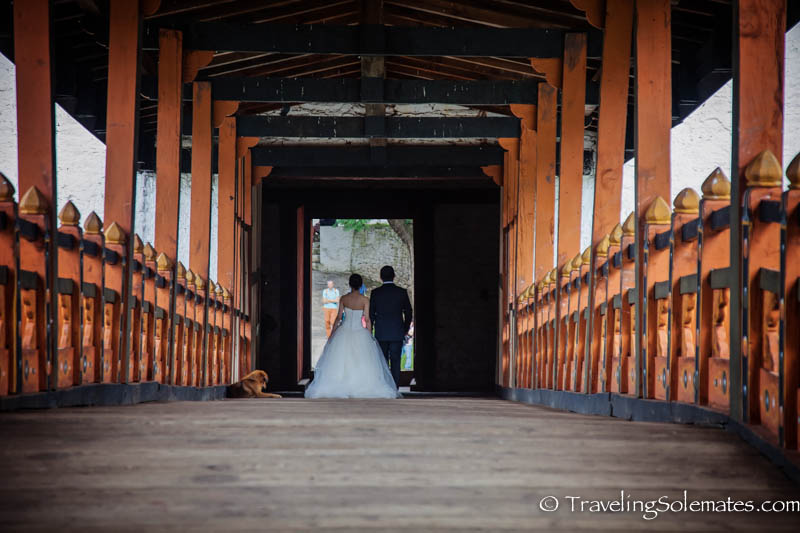 Tourists Bride and Groom on the bridge into Punakah Dzong

This Dzong is the venue of the coronation of the Bhutanese kings. The recent wedding of the current king was also held here. 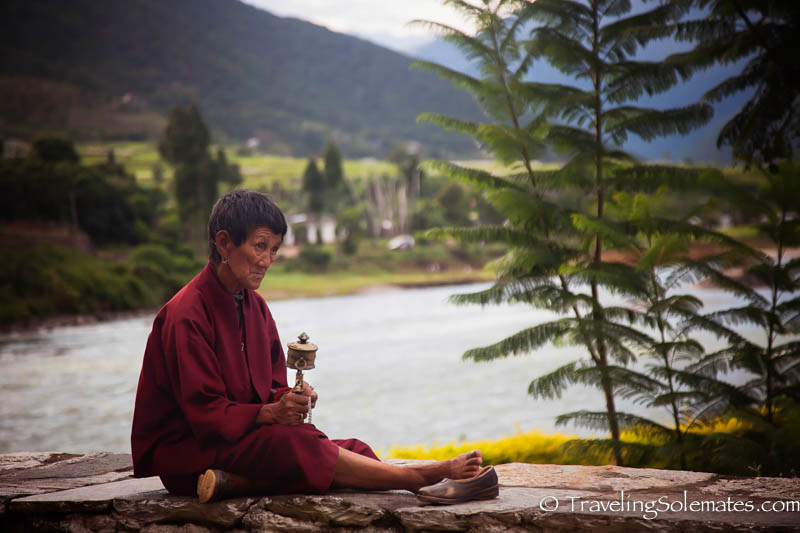 A women with a prayer wheel by Punakha Bridge 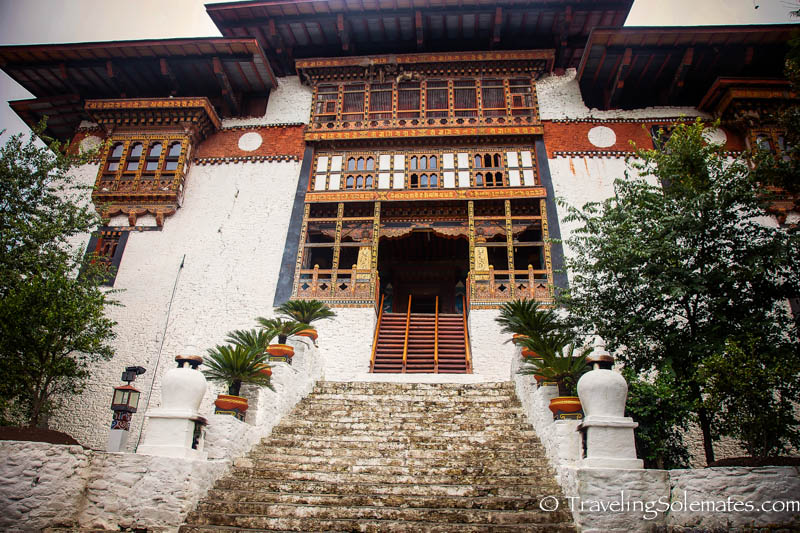 The entrance to Punakha Dzong, Bhutan

The Dzongs were designed to protect against invasion. One of the strategic features of this Dzong is the steep wooden entry stairs that can be pulled up. It also leads to a very heavy doorway. 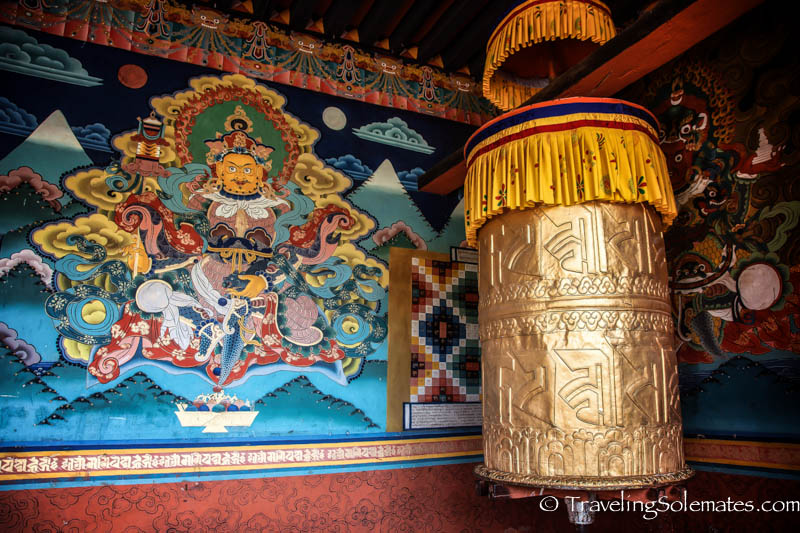 One of the two giant prayer wheels the flank the main door of the Dzong. Intricate religious paintings adorn the walls in many part of the Dzong. 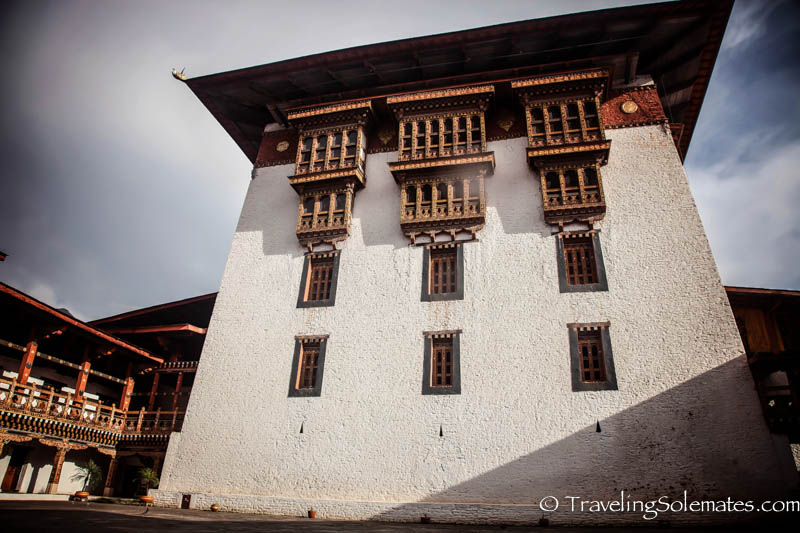 We were greeted by this immense building as we entered into the first courtyard to the Dzong, where the administrative offices are located. 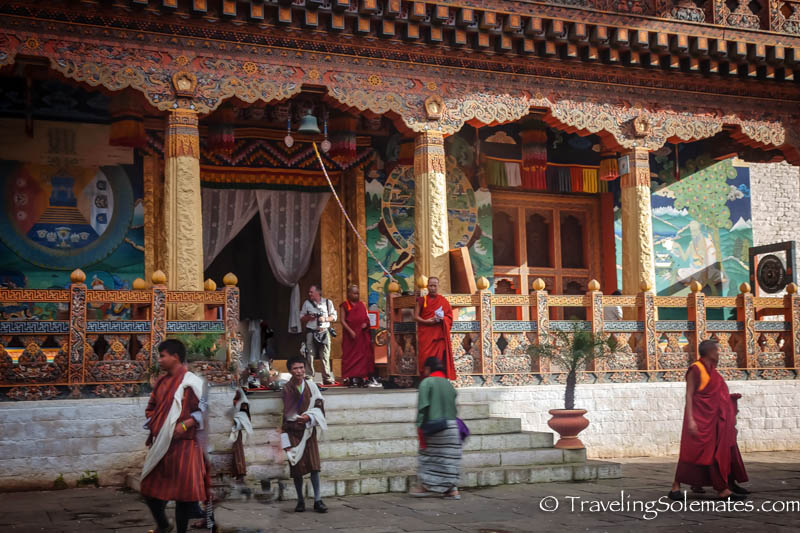 We headed into another courtyard that led us into the temple. It was like entering another world.  The interior of the temple is beautiful with exquisite wall murals depicting the life of Sakyamuni Buddha. Unfortunately, photography in the interior of the Dzong and all the temples in Bhutan is prohibited. 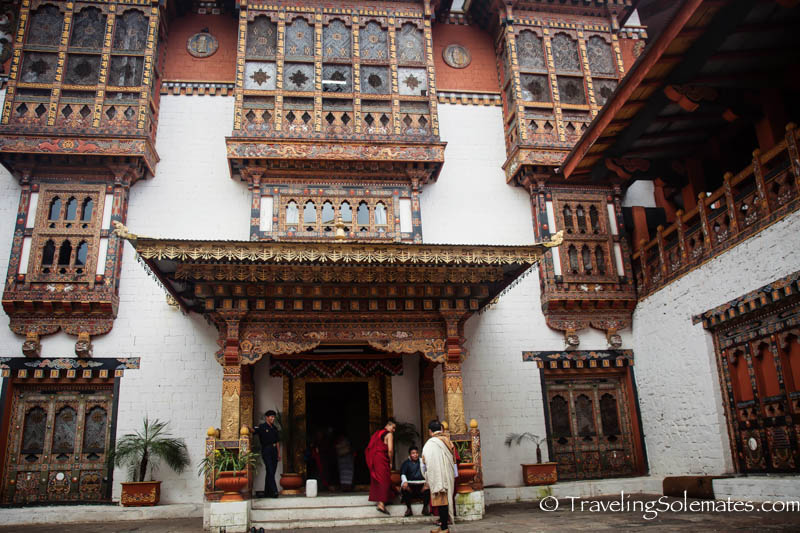 One of the monastic buildings in the Dzong. 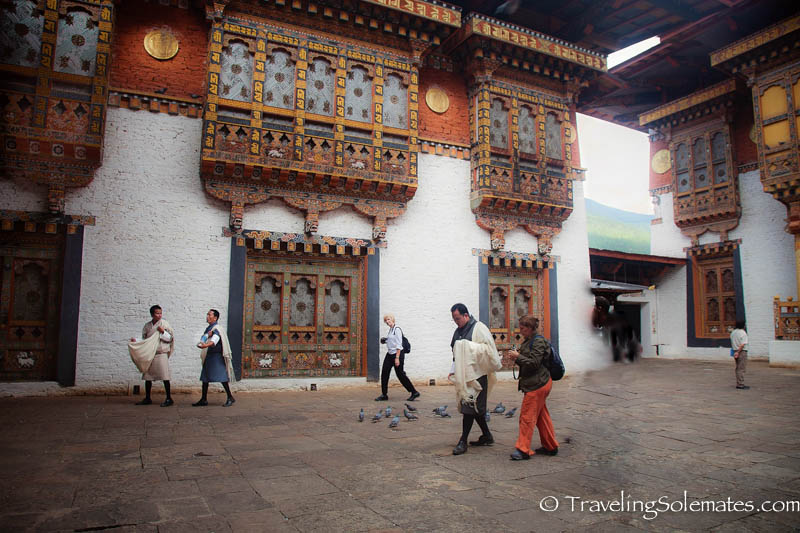 The monastic courtyard in Punakha Dzong 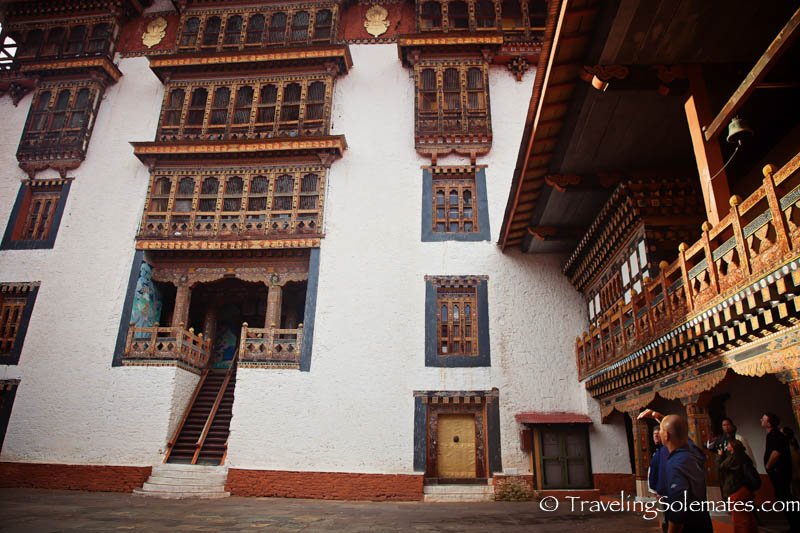 The Dzongs are perfect showcase of traditional Bhutanese architecture. This Dzong shows  superb examples of grand designs and construction typical in Bhutanese structures. 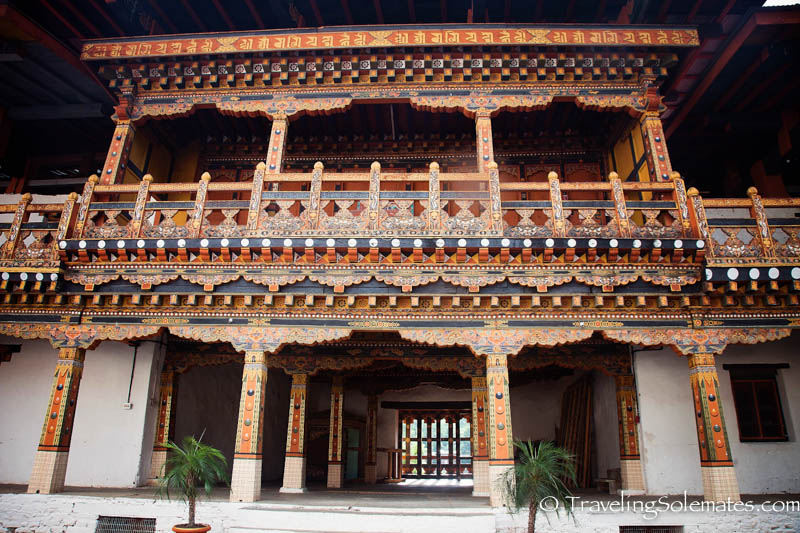 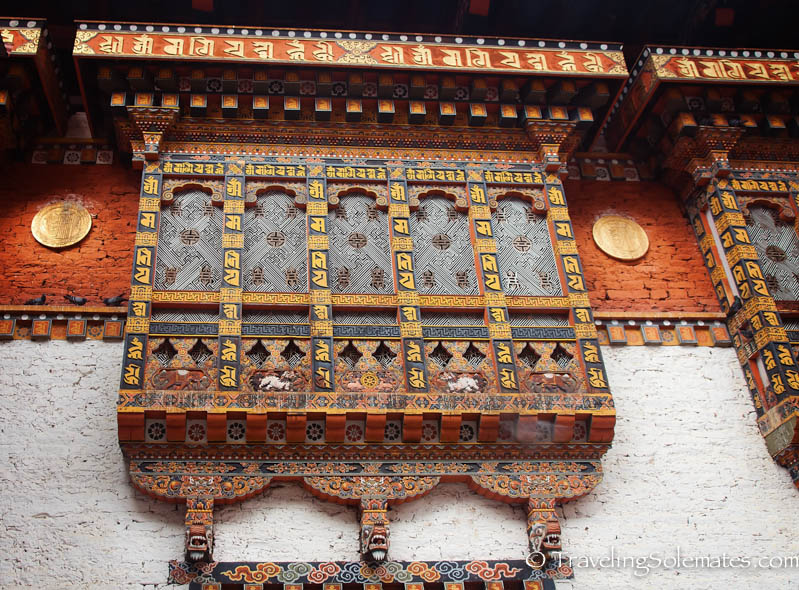 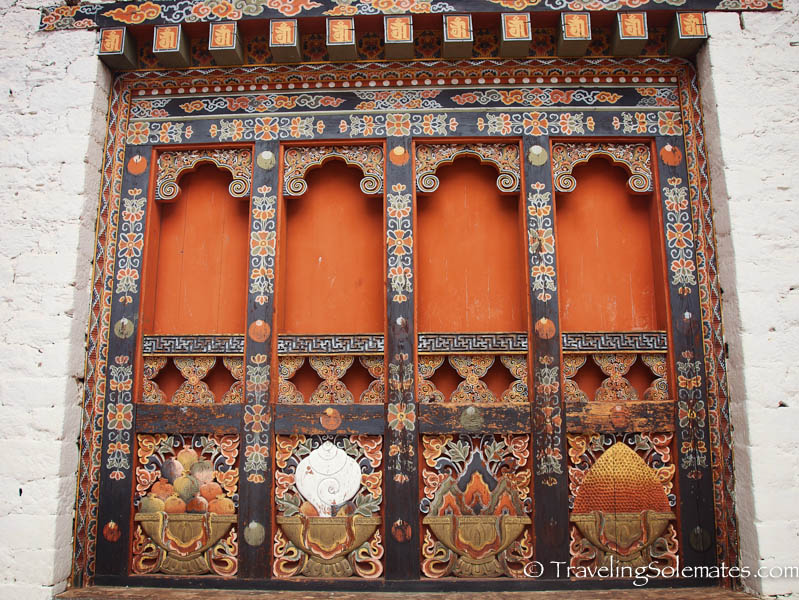 If the designs look impressive, the construction of the Dzongs are even more amazing. No nails are used in the building of the dzongs and their architects didn’t use any plan and rely only on mental concepts.

Linking to Travel Photo Discovery and Our World Tuesday.

The Journey into Bhutan, the Last Shangri-La
Thimphu, Bhutan (Part 1): The Festival, the Big Buddha and the City
Thimphu, Bhutan (Part 2): The Archery, Chorten, Artisans and More
The Mystic of Prayer Flags and Prayer Wheels
Bhutan: The Temple of the Divine Madman and His Ubiquitous Symbol
The Tsechu Festival in Wangdue
Trongsa, The Center of Bhutan
Bhutanese Mask Dances at a Festival in Bumthang
A Scenic and Cultural Hike in Ura Valley
Bhutan: The Hike to Tiger's Nest Monastery

View all posts by Marisol & Keith →